“When she said he was dying, and explained how little time he had left, Ellis Rogers laughed.” 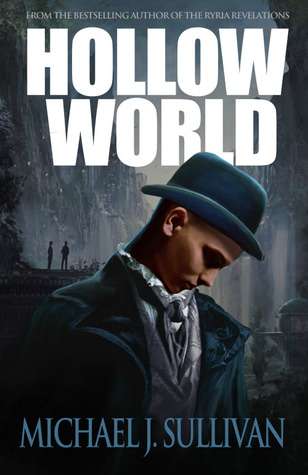 Disclaimer: My copy of Hollow World was an ARC (Advanced Reader Copy) provided to me by the author, Michael J. Sullivan.

Up front, I’ll admit that I have not read Sullivan’s popular Ryria series. I hope this has given me a fresh perspective toward a book that exists outside of his usual fantasy sandbox. Some people dislike it when their favorite authors begin to experiment, which is a shame. Man can not live on bread alone, whether he’s eating it or baking it.

I’d also like to point out that Michael is one of the nicest, most generous authors on the Internet today. You can usually find him doling out writing and publishing advice on many sites, including reddit. It’s refreshing to see that from a successful writer.

First, a brief description of the book provided by the author:

Ellis Rogers is an ordinary man who is about to embark on an extraordinary journey. All his life he has played it safe and done the right thing. But when he is faced with a terminal illness, Ellis is willing to take an insane gamble. He’s built a time machine in his garage, and if it works, he’ll face a world that challenges his understanding of what it means to be human, what it takes to love, and the cost of paradise.

Ellis could find more than a cure for his disease; he might find what everyone has been searching for since time began — but only if he can survive Hollow World.

Sullivan does a great job with the prose, balancing readability with occasional literary flair. An undercurrent of quaint humor flows throughout, sprinkling the text with chuckle inducers.

Then there is the premise, which is a fascinating blend of utopian science fiction and a whodunit mystery. It’s a big idea and I love books with big ideas.

Within the pages is a society that has eliminated the violence-inclined Y-chromosome along with procreation, since disease is no longer an issue and people can have failing organs replaced easily. Technology exists to service all of humankind’s needs. Money is useless. Work is nonexistent with a few exceptions (Geomancers ensuring Hollow World’s continued existence) so all time is spent on leisurely pursuits. I very much enjoyed the notion of artists playing such a big part, literally creating the backdrop to their subterranean domain.

As you can see, Hollow World is overflowing with great concepts, but that’s also my single gripe. I didn’t feel adequate space was given to explore them all. Character building was there, but at times, felt a little rushed. I’d love to see another book set in this same world, perhaps from the point of view of one of Hollow World’s natural inhabitants.

Before wrapping up, I’d like to talk about some other parts of the book that have nothing to do with the story itself.

In the first few pages, Sullivan address ebook piracy and I found myself in complete agreement with his views. He also offers purchasers of the physical copy a free ebook version. Such a deal!

Towards the back of the book, Sullivan editorializes about its controversial aspects as well as how it came into being. I admire any writer who is willing to explore the other side of an argument, because that’s what I think makes for good writing. It’s apparent that Michael does it so well, you never really know what his true beliefs are. That’s probably as it should be. Arguments are made and it’s up to the reader to come to his own conclusions.

For those looking for an homage to New Wave science fiction, I recommend grabbing a copy of Hollow World when it comes out in April of next year. There really doesn’t seem to be anything quite like it on the current market.

If you’d like, you can also follow the history and progress of the novel’s trip to publication here.