Let's Write Together, but Apart, but Together 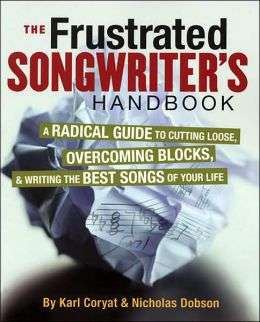 Over the past weekend, I read The Frustrated Songwriter’s Handbook (click on the cover for an Amazon link). I picked it up several months back, and to tell you the truth, I can’t remember exactly how I came to purchase it. I think I read a comment somewhere, probably reddit, and was intrigued. I do remember the person mentioning they used the precepts found within for writing fiction.

Obviously, the focus is on composing songs, but the core principle can be applied to any creative act: Force yourself to create as much as possible within a limited amount of time.

In the case of the book, the idea is to write twenty songs in a twelve-hour session. The authors state that some people will end up with six, others thirty. It matters not. What does matter is that during those twelve hours, you attempt to move full steam ahead and not get stuck on the cycle of endless rewriting and deliberation. Save the wrapping paper and ribbon for when you actually have a gift to give.

Of utmost importance is to just let your mind spill its guts. Don’t try to pick them up and put them back in your brain’s abdomen. It will survive. You need to force your inner critic to sit down and shut up. Make him wait out in the lobby while you play in your office.

To give you a quick idea of the process, I attempted a mini-session last weekend, spending one hour writing two songs. It felt amazingly liberating. When it comes to creating, I’ve always had a problem finishing, but with this method, it came easy. I had to finish because I had to move on to the next song. The only thing that kept me from working longer was a visiting guest.

The other key concept of this book is The Songwriter Lodge: A group of like minded people that share their twelve-hour creations and provide feedback. Essentially, it’s a guaranteed audience and reward for your long day of work.

Let’s face it, we need objective folks telling us their thoughts. Not just to inform us that our brilliant creation is actually not so brilliant, but also to tell us that our crap creation intrigued them the most!

Now that I’ve armed you with the ideas behind this book, I’d like to propose a shared challenge — a sort of Writer’s Lodge.

I would ask you to join me in setting aside a specific Saturday where we spend as much time as we can, up to 12 hours, just writing as many stories as we can. They can be sketches, they can be outlines, they can be summaries. They just need to be stories – a beginning, a middle, and an end. Don’t make them perfect. Don’t even make them good. Just make them as quickly as you can.

Then some point soon after, we can share what we’ve written and provide feedback, using something like Google Drive to share the documents and make comments. Maybe even a Google Hangouts session. Hopefully this will encourage the participants to chime in with “Oh yeah, I like that!” or “That one’s a bit too derivative, maybe you can change it by…”

0 thoughts on “Let's Write Together, but Apart, but Together”