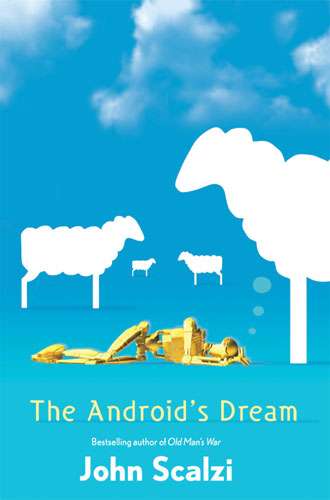 Though the cover art and title lead one to believe otherwise, The Android’s Dream has nothing to do with androids or their dreams. It’s more of a literary wink-wink-nod to Philip K. Dick. This is the first and only work by John Scalzi that I’ve read. I actually received the book via a Secret Santa exchange run on Librarything. You may have also heard of or read his most popular book, Old Man’s War.

From the opening chapter, you realize that the story is going to be chock full of humor, complex political intrigue and ridiculous tropes; and I mean ridiculous in the best way possible.

Without spoiling too much about the plot, the fate of Earth lies in a precarious balance due to an unintentional political assassination. The only way to resolve the issue peacefully is to locate a rare breed of sheep called Android’s Dream. It sounds simple until the group that has been tasked with finding said sheep realize someone is trying equally as hard to ensure it’s never found. Bring in a third player, a quasi-religious organization (not so loosely based on a real life organization founded by a science fiction writer) with their own agenda and the ride just got a whole lot more exciting.

For the most part, the characters were flat, but this book was about the farcical and therefore driven more by plot and backstory. I found most of the humor to be on point, but I also realize comedy is subjective and a few folks on Amazon didn’t find it funny at all.

On a final note, I’m in the middle of outlining this book to learn how Scalzi manipulated the scenes so well to express the complex plot structure. There was a lot going on under the surface and so many dots that connected in novel(puntastic) ways.

0 thoughts on “Review – The Android's Dream by John Scalzi”